May has definitely been my best month here in Cambodia.  I’m been reflecting a lot on what “moving with the Spirit” means to me.  If I’m honest, for months it has felt like I’ve been in this deep ocean floating alone, not knowing what is near or under me.  Which has been a really scary feeling for me.  May has felt like the start of a wave crashing.  I’m the surfer, Jesus is the surf board.  (I’d also like to point out that I’ve been sitting on His surfboard out in the deep ocean this whole time, yet not always aware of it.)  And the ride is just about to start.  I’ve had this month of excitement towards movement, that God is so clearly drawing me towards something better and I can’t wait to drop in and see what He has in store for me. 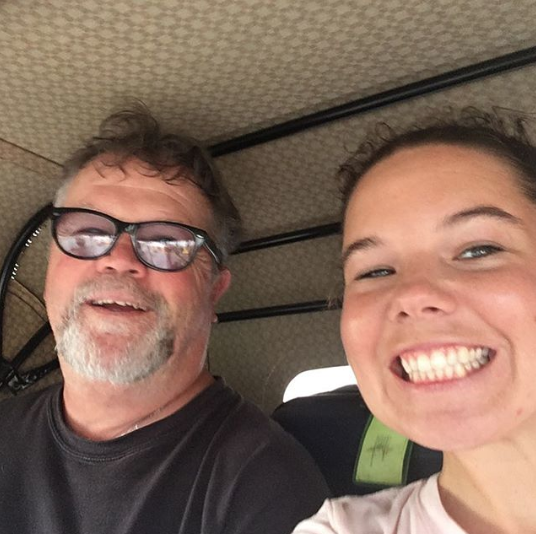 (Pops and I in Phnom Penh!)

May kicked off with a visit from my dad, Stu, he stopped in between China and Vietnam on a business trip.  It was great showing him my new apartment, my neighborhood, some of my friends, and I got to play tourist in Phnom Penh!  Bullet was pumped to see a friendly face as well.  Thanks to everyone who sent encouragement cards to me with him.  They made my heart swell.  It was fun spending some father / daughter time with him, we had some great talks about the past and the future. 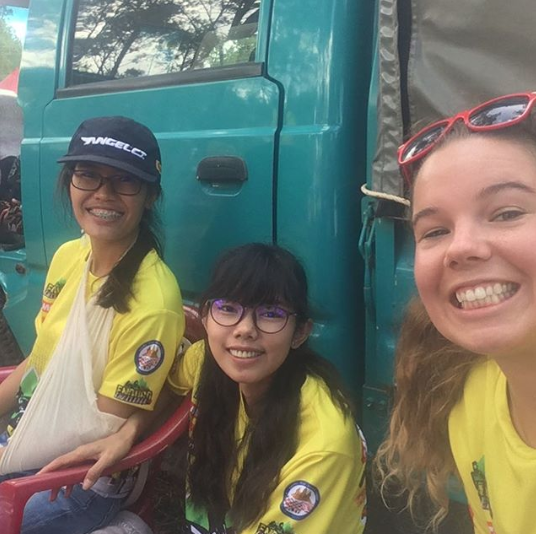 The following weekend, Bullet and I travelled to Kirirom (about three hours west of Phnom Penh) to the only place in Cambodia where I have found pine trees!  Some of the Prayer Circle Team were participating in a motocross enduro race.  It was a blast cheering them all on.  It was my first time camping in Cambodia, my first time volunteering at a motorcycle event that was in English and Khmer.  It was the first activity that wasn’t just for expats or just for Khmer that I’ve participated in.  Just a bunch of people who love motocross.  It was a blast!  Bullet was one of two dogs there, won everyone over.  I got to spend more time with my Prayer Circle Coach, Dennis, his wife, Sharon, and their two daughters, Theary and Srey Pov. 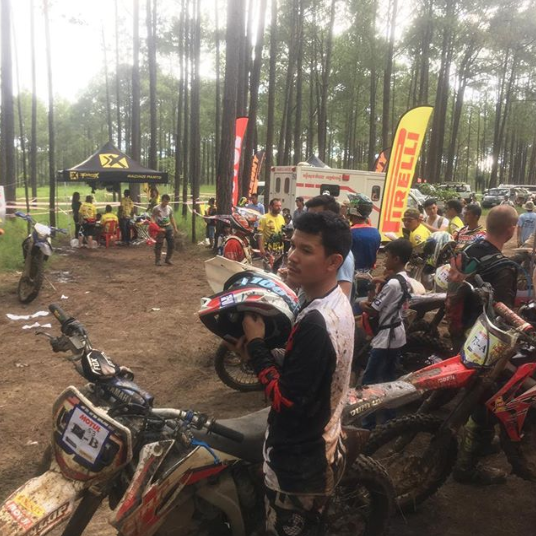 While in Kirirom, I was part of a really interesting God conversation with some retired expats who were also participating in the race.  I was sitting with them after the practice rounds, drinking beer and they were asking me about myself and how I ended up in Cambodia.  I explained that I was a missionary working with victims of the sex industry and that some of my Prayer Team was participating in the race.  One of the guys commented, “I’m like you, a philanthropist, but I don’t talk to imaginary friends.”  (To my credit, I didn’t roll my eyes at him.)  He then continued to go on, “You people shouldn’t go talking to girls at KTV bars (“hosted” bars), those girls are living the life, they are their own boss, they make good money, they want to be there.”  At this point, I’m about to launch into my whole human trafficking speech and Holy Spirit whispers, “shut your mouth and watch.”  HIS teammate shoots back at him with, “Wait, you honestly believe that?  You have a Khmer wife!  Those girls don’t want to be there and you know it.  They have no education so no job prospects, chances are they are the oldest daughter and have to provide for their entire family, that they came from a village and have no health care…”  He just kept going and his teammate is really taking it in.  You could see he had never thought about KTV’s in this way, even after living in Cambodia for a long time.  I truly believe if I had said the exact same thing he would have brushed me off as “the missionary” but since it was coming from his peer and teammate it was held with more validity.  It was super amazing to witness this interaction and to be personally encouraged that there are some adult, expat males, who “get it” here in Cambodia.  I’m really looking forward to seeing their team again at the next race in September. 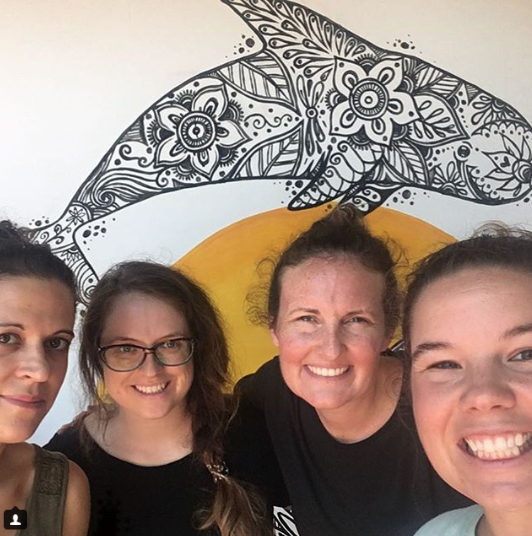 (Danielle, Kat, Stefanie and I in Kratie)

The following weekend, Danielle, Stefanie, Kat and I headed five hours northeast to Kratie to see the fresh water dolphins of Cambodia.  It is because of the Irrawaddy dolphins that I even knew about Cambodia as a nation.  They are the sole reason I wanted to come to Cambodia when I was 13 years old and the start of my calling to move here.  This was my first “girls weekend” and I loved every moment of it (minus when I got bite by fire ants).  We saw the dolphins not once but TWICE!  We went on an epic kayaking adventure, mermaided in the Mekong river and practiced our Khmer along the way.  If you want to see the Irrawaddy dolphins, just click here:  https://www.youtube.com/watch?v=lUzamslySKA  If you want to hear Kat and I singing Justin Bieber to the dolphins, just click here:  https://www.youtube.com/watch?v=2dxzuJNHCqo 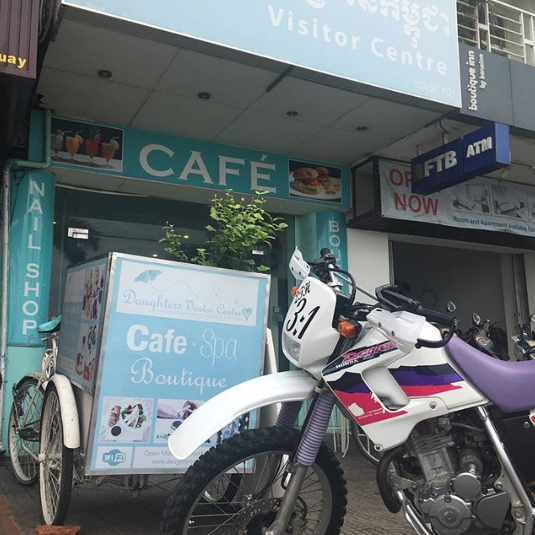 (My borrowed Prayer Circle motorcycle and the Daughters Cafe)

On the work front, I’ve had a few changes.  I’m now part-time at Daughters, we have hit a natural slow period here in Cambodia and a friend from the home brewing community is heading back to the States for 30 days and asked me if I would be interested in being a manager of his bar while he is away.  It’s a short-term commitment that allows me to work with another Khmer population as well as expats and tourists.  My first day helping out I spoke to two people who had connections to Portland (one was even sporting a Timbers shirt)!  I’m learning a ton of new Khmer vocabulary and learning more about my Khmer team by asking questions in Khmer about their family and their thoughts on beer. 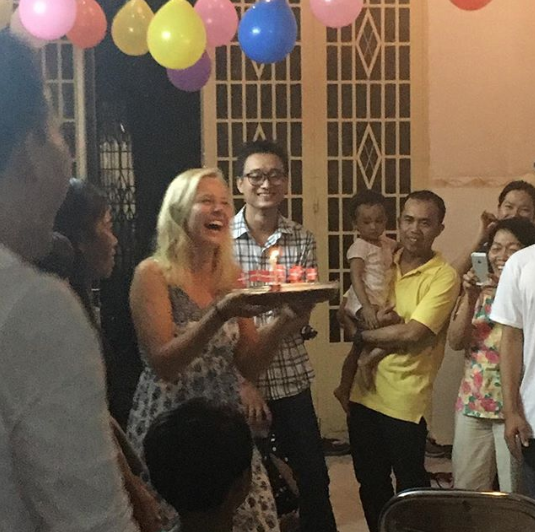 I’m still continuing to study Khmer part-time and really seeing my comprehension continue to grow.  During a Daughters Sponsorship update I had the following interaction, it started with the typical, “hello, how are you?” The client said, “not well.” And I asked, “why?” She responded with, “my child is sick.” My response to that? A fist pump and a smile, because that entire interaction was in Khmer and I UNDERSTOOD it! Then I realized my response was the wrong one, apologized and asked the translator to explain my “happy” response to sad news.  I’ve learned from this mistake, in another interview, a women was telling us that her daughter got into a good school program and I exclaimed “la-ah nah” (Good job!) before Lino, the translator, could tell me what was being said.  Lino then started to joke that I didn’t need her in the interviews anymore.  And I pointed out that I couldn’t even ask her to stay longer since I didn’t have the language for that.  See, I really do still need her!  I’ve also gotten a little more comfortable praying out loud in Khmer for the girls at Daughters. 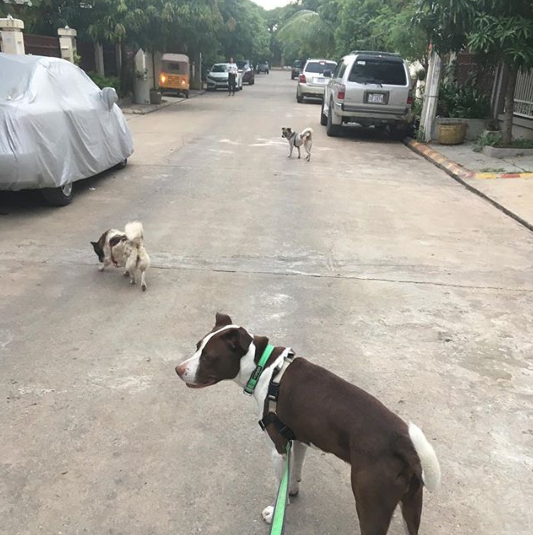 (Richer, Rocky and Bullet on a walk)

Bullet and I are currently house sitting for my boss, Martin, who is back in Germany for a couple of months with his family.  Responsibilities include: Bullet’s two new best friends, Richer and Rocky, four fish and an 18-year old girl, Esther, who I’ve know almost the entire time I’ve been in Cambodia.  She is also volunteering at Daughters during her gap year.  I have really enjoy spending her last few weeks in Cambodia, talking through what she has loved, what she wants to do in the future and helping her “leave well.”  It’s a little crazy to think in five years she will only be 23…oh man I feel old! 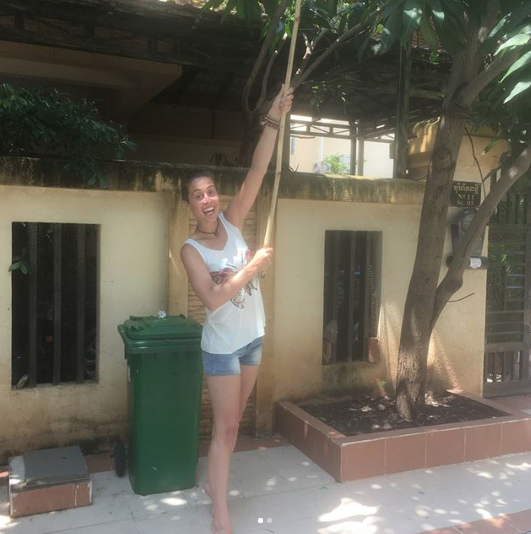 Speaking of being old, I missed my 10 year college reunion being in Cambodia in May.  However, my college bestie and her boyfriend flew into Phnom Penh from Nepal (they climbed to Everest Base Camp) and we had a reunion of our own.  It was a fun showing them around Phnom Penh and answering their questions about my life here in Cambodia. 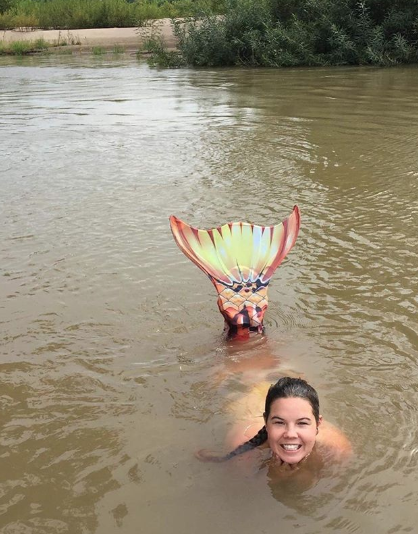 (Just a friendly reminder your favorite mermaid is coming to PDX)

Again, I’ll be back in Portland, Oregon July 15 – August 1.  I would really love to meet with you.  So please send me an email or Facebook message so we can set something up.  I’m planning a party on July 26th from 4-8PM at Hopworks.  Formal invite to come, but you can put it on your calendar now.  I really love hearing from everyone back home.

Hugs from Cambo,
Jenna (and Bullet)

This site uses Akismet to reduce spam. Learn how your comment data is processed.